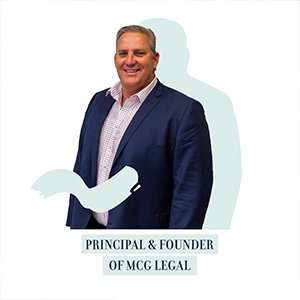 Many of you will know that MCG Legal has been advising Gold Coast businesses for over a decade, but have you heard how we started out? Our Principal and founder Matt Gill started MCG Legal in 2009, but you may not know that before starting his life in law, Matt served for over a decade as a police officer.

That was until one fateful day he broke his arm and was placed on restricted duties in what was referred to as the bomb shelter of Broadbeach police station, being the old radio room. It was during this time that Matt realised he wanted to take a different path. At the time, Bond University was offering a deal for police officers to undertake a law degree, in which the fees were discounted. So, off Matt went.

Matt worked full time in the police force while also studying law full time. With help from his family (and the roster clerk), Matt finished a Bachelor of Laws in 1997. Fresh out of both law school and the police service, Matt landed his first job as a lawyer at O’Keefe Mahoney Bennett Solicitors. Matt started in commercial and property law, however, transitioned in 2006, now specialising in Family Law. He was there from Jan 2004 to May 2009, where he made partner within four years.

Setting up his own firm wasn’t always something that Matt wanted or intended. However, in the lead up to the going out on his own, Matt went through a relationship breakdown and the Global Financial Crisis hit hard. He decided that it was now or never, so in early 2009, MCG Legal was born! For the first few years, the firm consisted of Matt, his wife, and his wife’s best friend. The three of them had originally come up with the idea while chatting around the kitchen bench. It was a struggle at the start, but they hit the ground running and haven’t stopped.

Due to his varied background, Matt has a breadth of experience dealing with people. The police force taught Matt to understand different points of view. According to Matt, “as a police officer, you have to deal with a wide range of different backgrounds and different situations, most of which are not good. You need to be able to work with this and get out the other side of it. This isn’t dissimilar to law. Lawyers, especially those in family law, are problem solvers.”

Matt has been on the Gold Coast since 1980, and by 2009 had made a name for himself in the Gold Coast community. By letting his personal and professional network know he had gone out on his own, he was able to pick up work and get started with MCG Legal. When it comes to business, Matt maintains that you never stop learning. As businesses evolve, you continue to make decisions. Some will be right and some will be wrong. It’s all about pushing forward. Over the last 9 years, MCG Legal has grown from 3 to 14 employees. However, Matt doesn’t take all the credit for MCG Legal’s success. Matt maintains that his staff are self-motivated and experienced, so he doesn’t have to juggle them. He can focus on technical work while his team help push the business forward.

Matt is a family man. Together with his wife, Matt has six children. While he doesn’t have a huge amount of time for himself (being a business owner, lawyer and father), Matt is heavily involved in the Gold Coast sporting community, with a particular passion for cricket. If Matt could give one piece of advice: family comes first – stay close to them at all times, regardless of what goes on. You never know what could happen tomorrow.

It wouldn’t be a real bio piece without letting you all in on Matt’s secret indulgence, his love of fine dining, in particular, degustations and collecting fine wines.